i had a close shave with death last weak along the expressway. it was a miracle  how i made it out.

I had gone for a riding exercise on the field. was a nice day.i enjoyed the day’s freshness as cool breeze settled on my face,licking up the sweat that dripped from a rigorous riding. it felt so good and cool that i paused for minutes to savor the moment.

Having satisfied myself for the day’s exercise, i set to go home.as i entered the expressway, i was following closely a young lady in a Rav4. it was a hot ride as the traffic increased. i followed the lady closely and took care to keep up the speed. if you have ever had to follow a Rav4 on a sports bicycle ypo’d understand that mine was a hard task. the driver of the Rav4 seemed to enjoy the competition i was putting up . it became a game kind of. 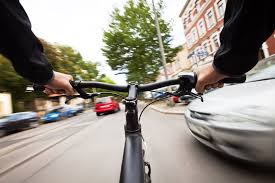 after about half a mile,something happened. The lady in front suddenly jammed her brakes and i heard horns blaring madly. i was left with a split second to decide how i wanted to see myself in hospital,bandaged arm,broken ribs..crazy stuff!. my sense of emergency and training took over. my survival instincts got on full throttle. i flew past the Rav4 and then  in that instant i saw what was causing the whole problem. a drunk driver had run into our lane,and cars were running helter skelter. As this realization dawned on me within the spit second, grabbed both the front and back brakes,and had 5the bike turn almost 360, the car coming straight at me had little time to understand what i did when i released the brakes and sped off like lightening just few seconds before it got to jamming distance of the Rav4. with the horns blaring madly, my legs got automatic,and i found myself meandering through streams of confused cars. as i came out of the hell, i still didn’t stop to look back, but few minutes later from my rear mirror i saw the Rav4, The lady promptly overtook me, and i could see her shocked Thumbs up as she flew past.

some minutes later in my closet,my adrenaline  rush had worn off, i began to replay the whole stuff in my mind. what if i had ran into the Rav4,or the taxi ? or any of the other confused drivers? that half a minute emergency reaction was worth the space of a webpage!. Thank God i made it out!